In March 2014, we got married at the Manchester Museum on Oxford Road in Manchester. Since this blog is intended to be a travelogue of the places we go as a married couple, it seemed fitting to start it with a post about where we actually got hitched.

The Manchester Museum began life as the collection (or ‘cabinet’) of John Leigh Philips, which was purchased by the Manchester Natural History Society in 1821 and housed in a premises on Peter Street from 1835. In 1868, the museum was transferred to Owens College (which later became part of the University of Manchester). The college asked architect Alfred Waterhouse to design a museum building to house the collection, and this building was first opened to the public in 1890. Alfred Waterhouse is probably best known as the Victorian Gothic Revival architect who designed Manchester Town Hall and the Natural History Museum in London, though he was also the architect behind the design of Strangeways Prison (now HMP Manchester). Though the Manchester Museum underwent major expansions in 1977 and 2003, the original architecture and Waterhouse’s designs are still a significant feature of the venue.

Married underneath a dinosaur

The Manchester Museum has a special place in the history of Manchester—in terms of the city’s architectural, intellectual and cultural history—and this did play a choice in our decision to get married there. We’re both proud of our home town, so it made sense to get married in one of the city’s gems. But our decision was also partly influenced by the happy childhood memories both of us have of visiting the museum on school and family trips. The museum’s Egyptian collection has long been a popular attraction for Mancunian kids, and both of us have fond memories of the temporary Lindow Man exhibitions (Rob in 1987 and Hannah in 1991). But, at the end of the day, our venue choice was pretty much decided by the fact that the Manchester Museum allows you to get married underneath a dinosaur… 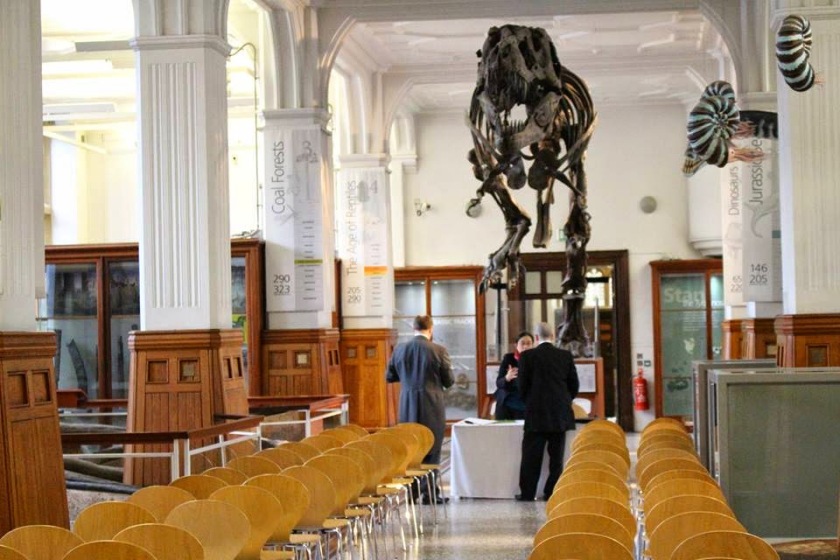 Our ceremony was in the museum’s Fossils Gallery, under the watchful eye of Stan the Tyrannosaurus rex (the museum’s famous polymer cast of a skeleton found by Stan Sacrison in South Dakota). Stan (the dinosaur, not the palaeontologist) has the distinction of being the second most complete T-rex skeleton ever found, with a virtually complete skull. This impressive fella loomed over the registrar as we tied the knot. 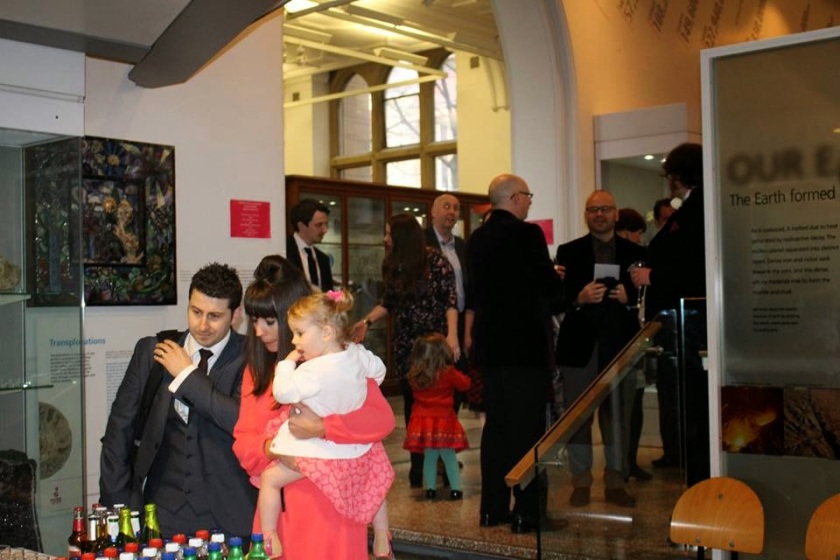 After the ceremony, we had a drinks reception in the gallery, surrounded by a 3,500 million year history of life of earth. We had quite a few kids at the wedding, so the museum staff arranged a special tour of the Living Worlds gallery for the children and their parents, while the staff set up the gallery for the meal. We weren’t expecting this added bonus, but it made for a lot of happier (little) guests.

Our wedding meal was in the Living Worlds gallery—one of the museum’s galleries that still showcases Waterhouse’s original architectural design, and Hannah’s favourite part of the museum. The guests were shown to their seats, and then we made our entrance by sneaking through the vivarium (with Hannah’s eyes resolutely closed so she couldn’t see the sleeping snakes), along the balcony, and then down the staircase at the end of the gallery. The tables were laid out amongst the exhibition cases—and underneath the imposing sperm whale skeleton that hangs from the gallery’s ceiling.

A few little crystals on the table

Given the surroundings, we didn’t think our wedding needed a theme or over-the-top decorations. The museum provided formal linens, crockery and cutlery, so we just added our own homemade favours and centrepieces (and a few little crystals on the table to catch the romantic lighting of the gallery). We made small parcel-style favours, filled with sugared almonds and black foil chocolate hearts (with a vegan and nut-free jellybean alternative) and tied with organza ribbon. We got all the stuff for favours, as well as our guestbook and table numbers, from The Wedding Mall. For the centrepieces, we placed hand-tied cream silk roses (from Just Artificial) in posy vases (from the very helpful Bluebells Florist in Middleton) and tied big black ribbon bows around them.

After the meal and the speeches, staff walked our guests down to the museum’s foyer, which had been arranged and lit for the reception. As we walked through the Ancient Worlds gallery and down the wide staircase into the foyer, our wedding band—the Dixie Kings—began to play, much to the delight of our younger guests (who all, apparently, love Dixieland jazz). The venue staff had set up the wedding cake at the entrance to the Living Worlds gallery, but they carried it down to the foyer so we could cut it at the reception. 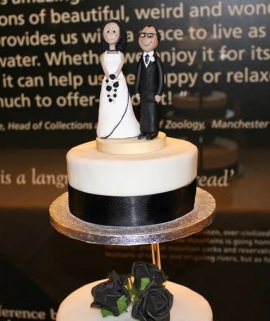 The cake was made by Hannah’s brother, and decorated with black ribbon and black foam roses from Silk Blooms, the company from which we got the bouquets, corsages and buttonholes. If you’re wondering why we chose artificial flowers, there are three reasons for this. Firstly, it was much less stressful to have the flowers delivered weeks before the wedding, rather than worry about a florist delivery on the day. Secondly, Hannah and her bridesmaids really wanted to be able to keep their bouquets as souvenirs of the big day. Thirdly, a wedding in a museum means that certain restrictions are in place for conservation reasons—for example, all real flowers need to be treated with chemicals prior to being brought in, and lilies are strictly forbidden. Silk flowers just made more sense all round.

As well as the pretty black roses, our cake was decorated with a bespoke cake-topper from Little You in Sowerby Bridge (a wedding gift from Hannah’s parents). This lovely clay model was made especially for us, by Kate at Little You, based on photographs of Hannah’s dress and Rob’s suit. She even recreated the black laces on the back of the wedding dress, the bridal bouquet and Robs’s ivory rose buttonhole.

As our night at the museum came to an end, we headed off down Oxford Road to the Midland Hotel—appropriately enough, next door to the site of the original Manchester Natural Society museum—ready to begin our honeymoon the following day.

But that trip will have to wait until next time…

3 thoughts on “Wedding at the Manchester Museum”