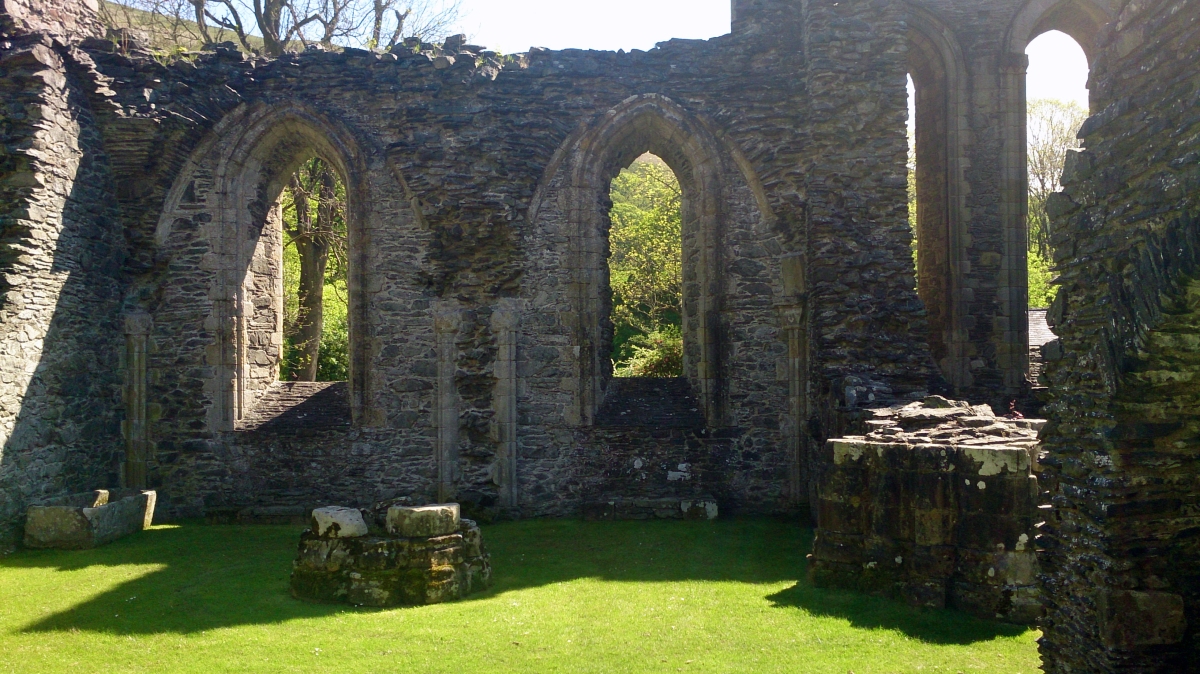 The Manchester Medieval Society (founded in 1933) runs an excursion to sites of historical interest each year. As Hannah is currently the society treasurer, we always go along on the excursions. Since we’ve decided that this blog will just be about places we’ve visited since our wedding, the first excursion we’re going to write about is the 2014 trip to Denbighshire.

The ruins of this Cistercian abbey lie in Llantysilio, near Llangollen. ‘Valle Crucis’ means ‘vale of the cross’, and the name derives from the nearby Pillar of Eliseg, a ninth-century stone pillar that was once surmounted by a towering cross. The abbey was founded in 1201 by Madoc, ap Gruffyd Maelor, and was dissolved in 1537. It is now looked after by Cadw.

Valle Crucis was the last Cistercian abbey to be founded in Wales. As with other Cistercian abbeys, its location was selected for its isolation—although apparently the ‘isolation’ in this case was achieved by relocating the population of the village that stood in the way. The monks of Valle Crucis came from Strata Marcella, an older abbey near Welshpool. According to the rules of their order, the ‘choir monks’ (who wore white habits) lived in devout seclusion, while a community of lay brethren (who wore brown habits) attended to the manual labour and the more public aspects of abbey life. It seems that the original design of the abbey included accommodation for around twenty choir monks and forty lay brothers.

The abbey suffered a number of crises in its early years. Shortly after Madoc’s death in 1236, the abbey was ravaged by fire. It is also believed that the abbey suffered damage during Edward I’s invasion of Wales in the late thirteenth century. As with many abbeys, the number of monks at Valle Crucis fell as a result of the Black Death in the mid-1300s, and the building was apparently also damaged during Owain Glyndŵr’s revolt in the early fifteenth century. 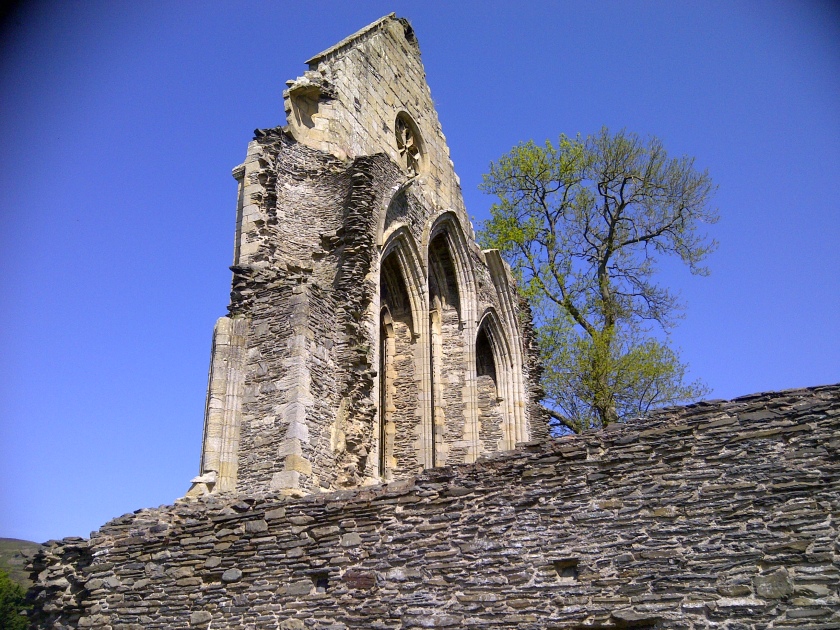 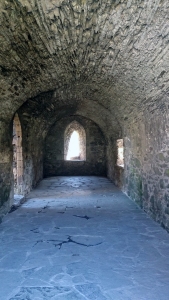 But the abbey bounced back. In 1535, it was the second richest Cistercian abbey in Wales (after Tintern, and known for its association with the literary arts. In the fifteenth century, the abbey (more welcoming now that the Cistercians had relaxed the austere rule of their order) had offered hospitality to Welsh poets, including Gutun Owain, Guto’r Glyn (who died and was buried at the abbey in 1493) and Tudur Aled. Nevertheless, when the Reformation came, this wasn’t enough to save Valle Crucis, and the abbey was identified for suppression in 1537.

On its dissolution, Valle Crucis was leased to Sir William Puckering, then Baron Wotton, but the estate was eventually sequestered by parliament in 1651. By the late 1700s, the abbey was being used as a farm. Eventually, though, Cadw took over—and Valle Crucis is now the best-preserved monastery in North Wales. 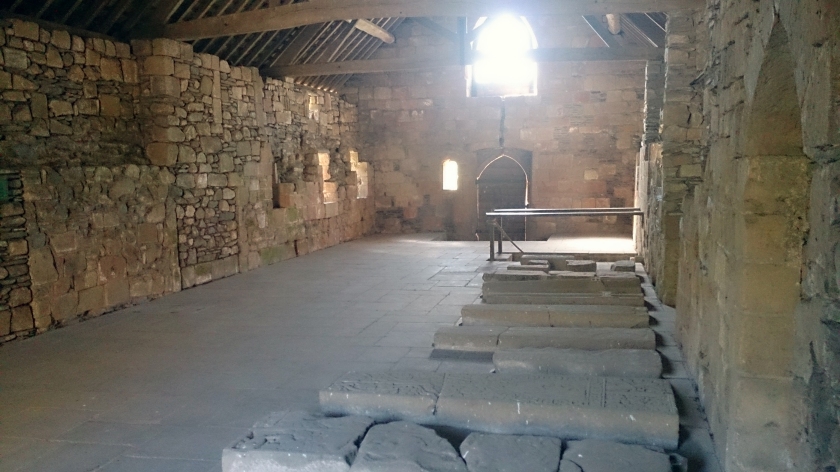 This is a really beautiful place to visit, and a significant part of North Wales’s medieval heritage. Just wandering around Valle Crucis gives you a sense of the abbey’s imposing past—but also its importance to the landscape and people that surrounded and inhabited it.

The abbey church and west range are in ruins, but the east range is mostly intact—with the dormitory and abbot’s rooms being particularly well-preserved (and unusually accessible, given that they’re on the first floor of the building). The dormitory now houses a collection of medieval grave slabs, including that of Madog Crypl. 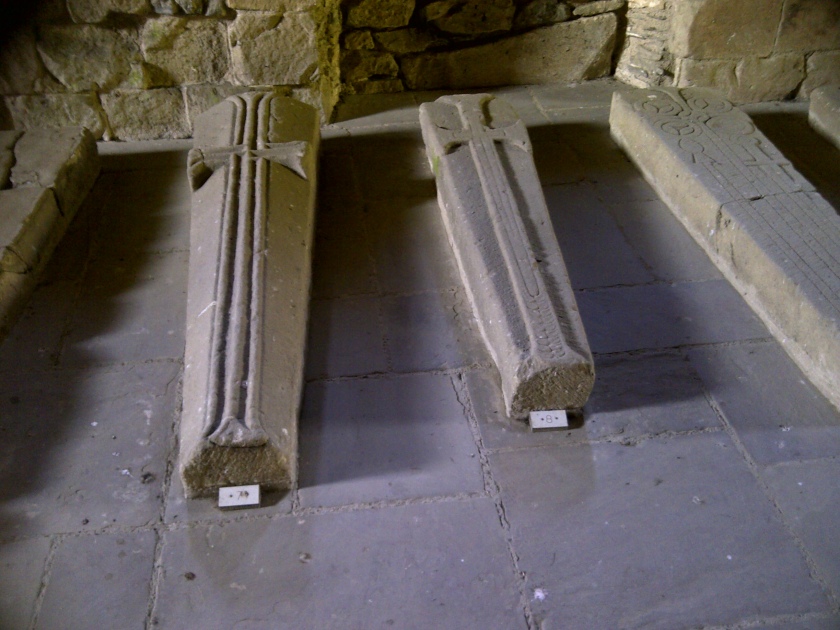 Elsewhere, there are beautiful surviving window traceries and evidence of nineteenth-century restoration. 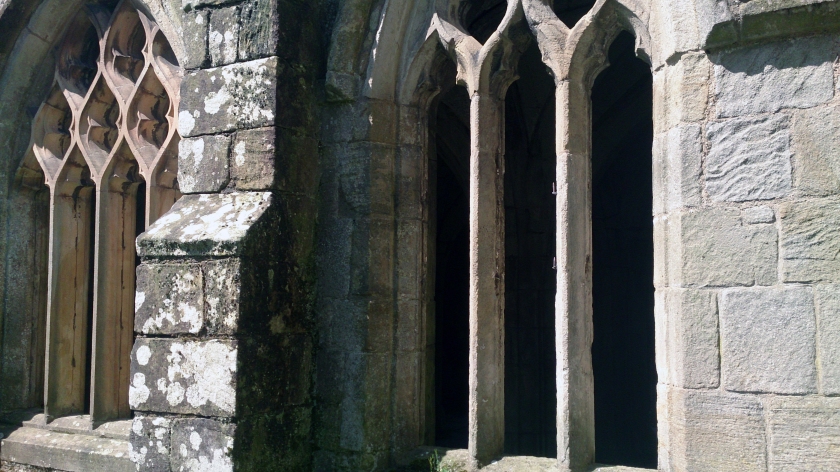 After spending some time enjoying the evocative atmosphere at Valle Crucis, it was time to move on to our next location…

Llangar Church (also known as All Saints Old Parish Church) was built in the fifteenth century—though there’s evidence of an earlier church at Llangar in documents dating to 1291. This isolated little church is reached by a rocky footpath just off the B4401, and its late medieval heritage is ostensibly obscured by bright whitewashed walls (which was actually the norm for parish churches until Victorian times). 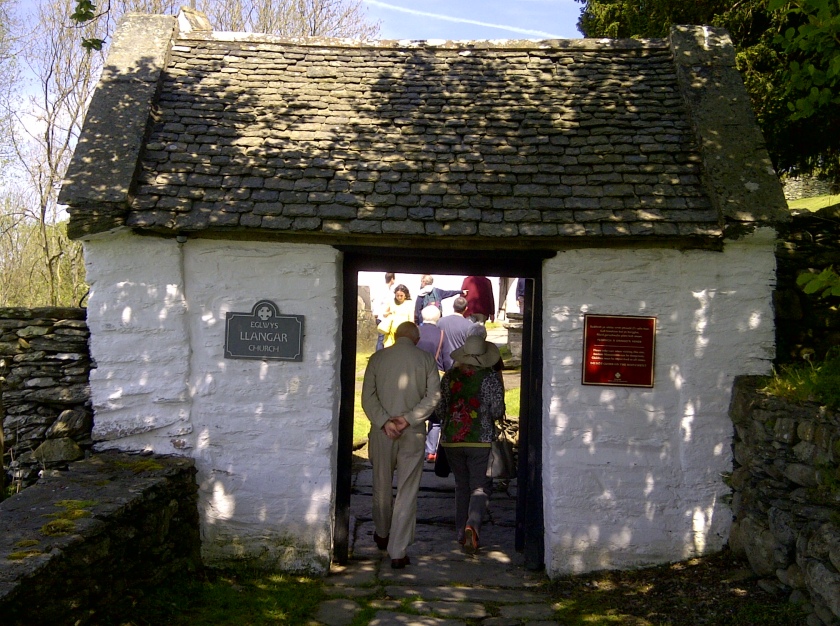 The church at Llangar really is a testament to Cadw’s restoration and conservation work. Although the building had served as the parish church for several centuries, it was abandoned in the 1800s as a result of people moving away from Llangar (and its neighbouring township of Cymmer). When the Church of St John the Evangelist at Cynwyd was consecrated in 1856, it became the new parish church, and the decision was taken not to restore All Saints. And so the old church languished in a state of disrepair and dilapidation until the late twentieth century. 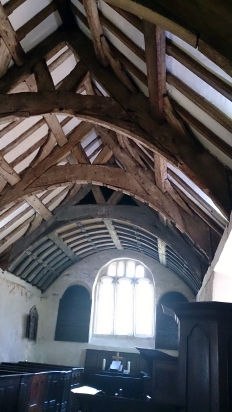 In 1974, Cadw began a major rescue operation. In a way, the church’s disuse had some benefits, as a number of features had remained untouched—or were lying in wait beneath the veneer of later centuries. The medieval arch-braced roof trusses are still visible, as is the barrel-vaulted canopy over the altar. Restoration work was also carried out on the church’s (mostly Georgian) furnishings—including the dramatic pulpit, the box-pews (for the gentry) and the benches (for the rest of the congregation). The singing gallery and music stand are also preserved.

Undoubtedly, one of the most captivating features of Llangar Church is the series of wall paintings. When the restoration work was carried out, eight layers of wall paintings were uncovered, dating from the fifteenth to eighteenth centuries. On the south wall, the fragmentary remnants of a painting of the seven deadly sins (in which each of the sins is represented by a human figure riding on the back of an animal) and seven corresponding works of mercy are (just) visible. The north wall displayed the text of Gweddi’r Arglwydd (the Lord’s Prayer).

From the cradle to the grave

But by far the most dramatic wall painting is the eighteenth-century skeleton who faces you as you enter the church. This grisly spectre of mortality wields a dart and an hourglass, and has a set of gravedigger’s tools between its legs. We were very curious about the skeleton’s pelvis, though, as it seemed to some of us that there was something else depicted in this painting. Although it’s not very clear, it does seem like there’s something nestled under Death’s ribcage—and a few members of our group suspected that it might, in fact, be a baby. If this is the case, then the picture is designed to offer a grim reminder of the inevitable path of human existence—all the way from the cradle to the grave. 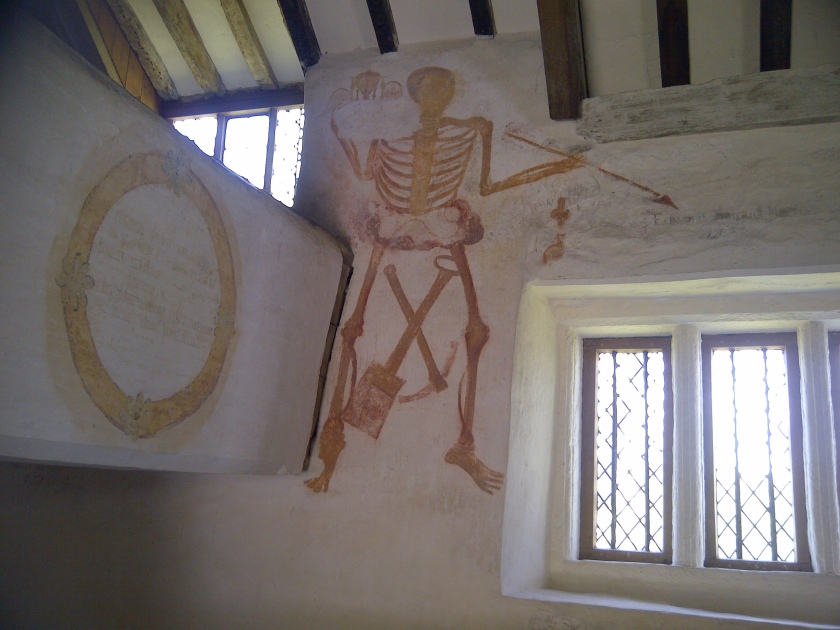 Outside the church is a picturesque sloping churchyard which still houses a jumble of tied tombstones.

Llangar Church is now a Grade I listed building and a scheduled monument. It’s not the most accessible heritage site in the country (which is, of course, part of its charm), and (I believe) it has rather limited opening times. Because we were visiting as part of an excursion by a historical society, we’d been in touch ahead of time and were shown in by a Cadw guide, but we’d advise you check their website before planning a trip.

And if you do get to visit Llangar, you should really combine it with the next place on our itinerary…

Rug (or Rhug) Chapel isn’t actually medieval—it was commissioned in 1637 by William Salesbury—so it wasn’t an immediate choice for a Medieval Society excursion. However, this beautiful private chapel, which is dedicated to the Holy Trinity, is just too lovely to miss.

The rather plain exterior and garden setting of the chapel is misleading. This deceptively modest little stone building houses an incredible interior, filled with lavish carved and painted decoration. The Cadw website describes the chapel’s decoration as being the result of ‘high church pretensions and a zany style’, and this seems like a fair assessment.

One of the most impressive features is the chapel’s roof, with its coloured panels running the full length of the building. It’s adorned with cut-out angels and a decorative frieze—and it’s just spectacular.

Looking down from the roof, though, you discover that all the timberwork in the chapel is highly decorated. From the pews and the bench-ends, to the screens, altar rails and parapets.

And, if the skeleton at Llangar Church wasn’t enough to remind you of your mortality, the chapel also boasts an imposing wall painting of its own—a skeleton (complete with hourglass and additional skull) surrounded by verse in Welsh warning of the fleeting nature of life. Surmounting the Welsh is the Latin motto Ut hora sic vita—as is an hour, so is life.

Standing outside Rug Chapel is a stone-based pillar that appears to be an old town or market cross. This is a little bit of a mystery, as the chapel was built several centuries after a cross like this would’ve been erected. And there’s also no clear evidence of a settlement on the site that would’ve warranted such a marker.

We didn’t really have time to ponder this puzzle, however, as we had to return to the coach and continue to our final site of the day.

Denbigh Castle (Castell Dinbych) stands on a rocky outcrop overlooking the Vale of Clwyd. Construction began in 1282, under the instruction of Henry de Lacy. It was intended to be part of Edward I’s ring of fortresses around North Wales, and it was completed (after building was halted when the incomplete castle was temporarily captured in 1294 during the revolt of Madog ap Llywelyn) in 1305.

The castle was heavily defended by its enclosure wall and by its seriously unwelcoming gatehouse that was buttressed by octagonal towers, but also by the walled town that occupied the rest of the promontory. One of the gateways to the walled town (Burgess Gate) still survives, and sections of the wall (which also survives) are accessible to visitors. 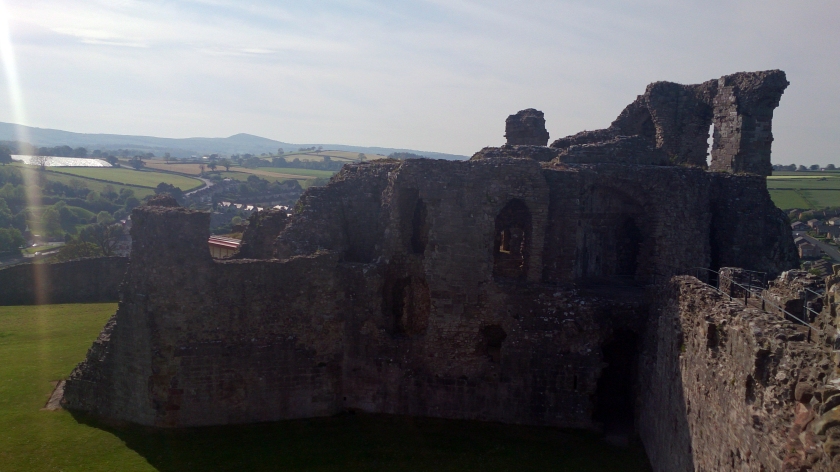 But, sadly, we only had time to visit the castle—though we did get a fantastic guided tour (and our guide coped admirably with the fact that he had to show a group of academic medievalists around a medieval castle). While the castles of Beaumaris, Caernarfon, Conwy and Harlech (also part of Edward I’s ring of castles) might be better known, Denbigh Castle is a pretty breath-taking site. Although it was allowed to fall into ruin after its abandonment in 1660, large parts of the structure survive—enough to help visitors build a mental picture of the castle in its prime. 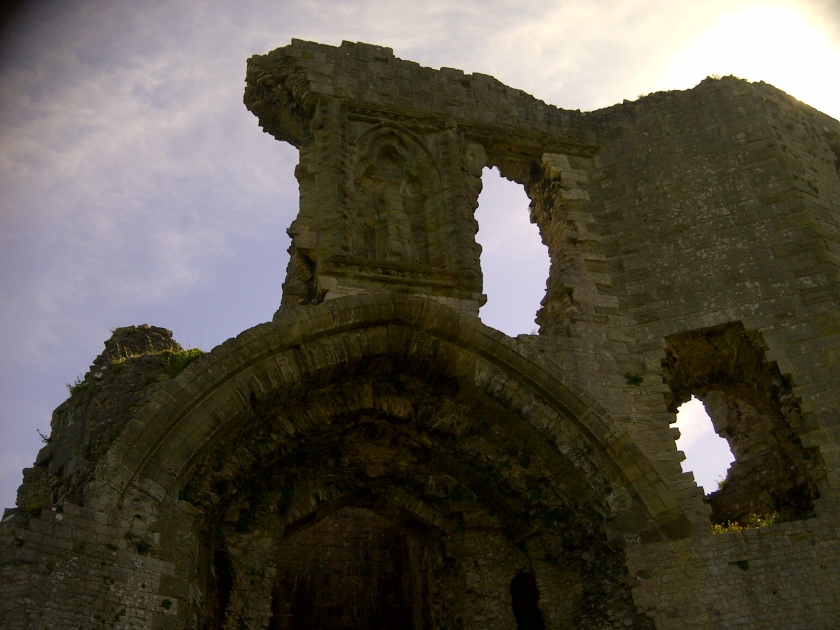 Parts of the triple-towered gatehouse survive, including the large carved figure (possibly Edward I himself) who greets visitors as they arrive. Inside the walls (parts of which are preserved and accessible to the bold vertigo-less visitor), some of the buildings of the castle’s inner ward are still identifiable. In particular, the hexagonal kitchen tower can be identified by its two massive fireplaces and its proximity to the castle’s gigantic well.

Other features of the castle can also be discerned—including the sally port (or sneaky back door) in the southwestern corner and the Postern Tower. All of these remind you of the castle’s formidable defences, and its role as a fortress as well as a place of residence. In fact, the castle ruins paint a picture of a structure that is very creative in its strategic complexity—for instance, the sloping pathway leading up from the Postern Gate to the castle has a tight, sharp turn in it, which was intended to disorientate and expose enemy soldiers seeking to attack from this side. It’s quite dizzying to look at this defensive construction and imagine how an invader would feel if they got caught there.

Like all the sites we visited on this trip, Denbigh Castle is in the care of Cadw. In addition to being told the story of the castle’s construction and habitation, we were also shown some of the more recent restoration work that has been carried out to preserve this site for future generations. This work included the removal of cement-based mortar (a remnant of earlier restoration work) and the stabilizing of masonry with locally-sourced materials that are sympathetic to the original stonework. 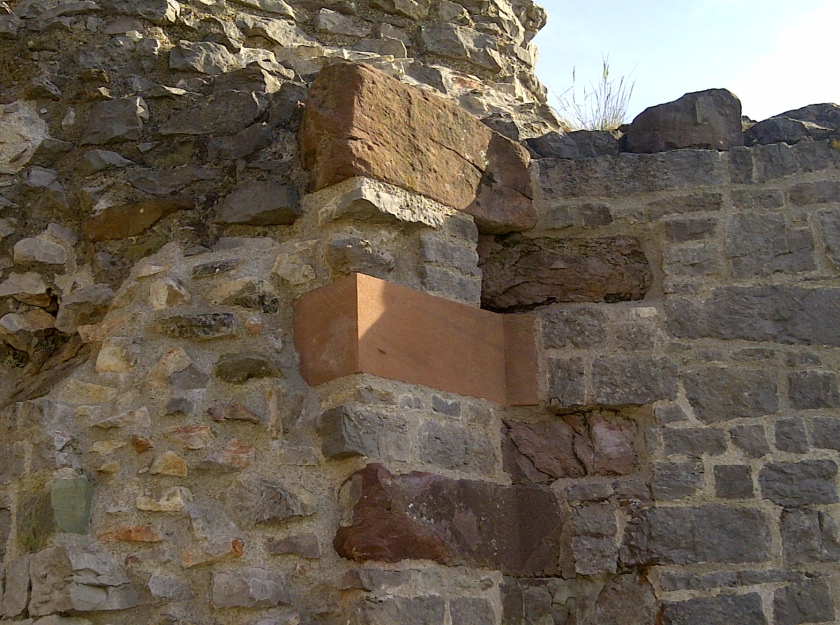 And with that, our trip to medieval Denbighshire came to an end. Time to return to our coach and head back to Manchester.